The year has flown by again and here I am staring 2017 in the face!  Before the year was over I wanted to re-visit some of the places I’ve traveled this year and share some of the interesting places with you.

After our September Rhineland tour, my partner Matthias and I spent a few days scouting out places for possible future trips and some of our own sightseeing.  One place that I wanted to see was in Augsburg, in Bavaria.  My main reason was to see the “Fuggerei” – the Oldest Social Settlement in the World.

Long before any national health system or Medicare, Jakob Fugger of the Lily, also known as Jakob Fugger the Rich or sometimes Jakob II, who was a major merchant, mining entrepreneur and banker of Europe founded the Fuggerei in 1521 as a social settlement for needy citizens of Augsburg.  Not only is it unique in age, but also in continuity: The social settlement is still financed exclusively through an endowment. The concept was already groundbreaking nearly 500 years ago: Jakob Fugger did not allow residents to become paupers, but rendered assistance for self-help. With this concept, the founder was much ahead of the demands made by Martin Luther and later Catholic social reformers. 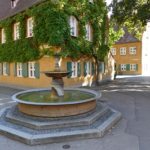 Not only has the age of the Fuggerei contributed to its fame as the world’s oldest social settlement, but also the composition of the rent. The annual rent excluding heating is only .88 euros (the nominal value of a Rhine guilder in 1521 the weekly income of a tradesman.)  Today a further 0.88 euros per year is paid by the residents for the clergy of the Fuggerei.  The foundation administration charges an extra lump sum for water and sewage, garbage removal. Because there are usually more requests for Fuggerei apartments than available, applicants are put on a waiting list.

We walked our way across all of Augsburg and finally found the entrance, the Fuggerei is an ensemble with eight lanes and seven gates – it truly is a “city within a city” having its own church, “city walls” and “city gates.” 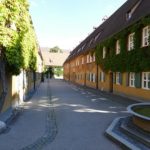 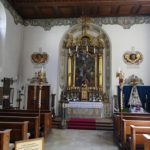 A visit to an example of what an old house would have been like showed us the following rooms: 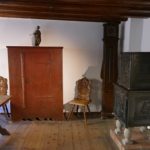 Living room – Apart from the kitchen, the Living room was the only other room heated. It was smaller than the bedroom and only contained the most necessary furniture.  The Living room also served as a workplace or work room for its inhabitants. Here trades and crafts were carried out. Among other shoemakers, weavers, braid makers, builders of doll houses and bird houses lived in the Fuggerei. 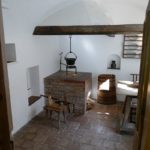 Kitchen – the kitchen was the smallest room in the house. Through a small window in the kitchen, you could watch a sleeping child in the living room while cooking. The window also was a practical way to serve food, as they didn’t usually eat in the kitchen. Unbelievably the “toilet” – a chair with a container which was emptied into a nearby stream after dark stood in one corner of the kitchen or in a closet. !! 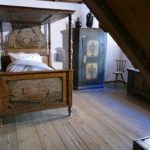 Bedroom – Although the bedroom was often the largest room in the apartment, it was not heated. This room was used not only for sleeping, children were born in the bedroom and usually residents died in their own beds. 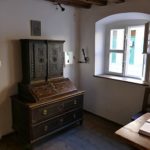 An interesting gadget they had was a way to unlock the front door from the living room. A small window in the living room provided a view into the hallway to see who was entering the house. A small storage cellar was located beneath the hallway.  A vent at the foot of the front door allowed light and air into the cellar, only seldom did a Fuggerei house have a large cellar more than 3 meters high. These cellars were probably used as workshops by weavers.

Here are some pictures of what the apartments look like today. 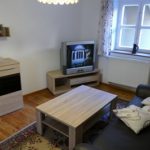 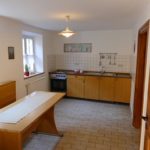 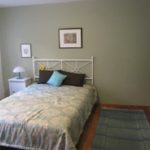 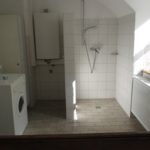 I thought the little apartments are quite nice for a senior couple or young couple, just what you need, with even a little green space in the back. The whole compound also has a very interesting museum, a beer garden for some refreshment and also the WWII bunker.  Here are some links with videos of the bunker, most of the Fuggerei was destroyed during the war but because of the bunker not many causalities (in German but you can see the pictures) and also more info on the whole place.  I enjoyed our visit there very much.

Short video about the Fuggerei.

In the next days we also visited Nördlingen, one of only three villages in Germany that still has its complete wall around the city. (We walked the whole wall) This place was also built in the crater left by a meteorite which struck the earth 15,000 years ago.

We also had a lovely visit with another one or our German friends who showed us the “Fairy tale” garden on the grounds of the Ludwigsburg Palace and I have to tell you about a really neat tour we took in the Ludwigsburg area called “Crime Scene Tours”.   Sound grisly but it is a 19th century cold case murder mystery that has ties to the U.S. and Robert E. Lee.  Have to tell you about that too.  Coming soon.