Mardi Gras, actually French for “Fat Tuesday”, refers to the Tuesday before Ash Wednesday, the beginning of Lent’s 40 days of repentance that ends on Easter Sunday.

Bringing out the wild side of people, Fat Tuesday, or Mardi Gras as it is more commonly referred to, is filled with events to tempt the final moments of madness and self-enjoyment in locals everywhere as they fill the streets with carnivals, parades, and masquerade. 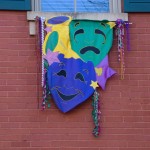 St. Louis (near where I live) has a very large Mardi Gras parade, and it was enjoyed this past Saturday on a pleasantly warm day.  Looks like fun was had by all, but big crowds are not my thing anymore.

Of course we know that festivities are held the world over but I wanted to relate some of the customs celebrated in Germany, Austria and Switzerland. 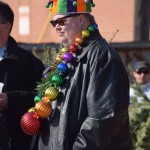 Actually, a more precise question would be: What is Fasching, Karneval, Fastnacht, Fasend, Fastelabend? They are all one and the same thing: pre-Lenten festivities celebrated in grand style in mostly the predominantly catholic regions of the German-speaking countries. The Rhineland has its Karneval, Austria, Bavaria and Berlin calls theirs Fasching, and the German Swiss celebrate Fastnacht.

The season of Fasching begins in some places on the 11 of November at 11:11 am OR the day after Three Kings Day (Dreikönigstag) on January 7th, but the main celebrations begin the week before Ash Wednesday.

A Carnival prince and princess are elected by a mock government of eleven guilds (Zünfte) soon after the Fasching season opens and they basically plan the carnival festivities.  Most of the celebrations are held the week before Ash Wednesday as follows:
Wives fastnacht (Weiberfastnacht) – Thursday before Ash Wednesday. This is mainly an event held in the Rhineland. The day begins with women storming into and symbolically taking over city hall. Then, women throughout the day will snip off men’s ties and kiss any man that passes their way. The day ends with people going to local venues and bars in costume.

Parties, Celebrations and Parades – People will celebrate in costume at various carnival community events and individual parties. Carnival parades abound, it is literally the weekend for people to live it up.

One of the villages we stay in on our Baden tour is home to a Carneval Mask museum. The first mention of Fasend in this town dates back to 1286.  This area of Baden celebrates with 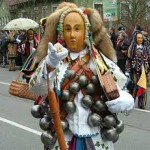 many spirited parades and amazing costumes.  One of the largest celebrations in this area is in Rottweil, Germany. 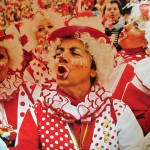 Rose Monday (Rosenmontag) The largest and most popular carnival parades take place on the Monday before Ash Wednesday. These parades come mostly from the Rhineland region. People throughout the German-speaking countries will tune in to watch the biggest German carnival parade of all which is held in Cologne.

Fastnacht Tuesday ( Fastnachtsdienstag )- Besides some parades which are held on this day, you have the burial or burning of the Nubbel. A Nubbel is a life-size doll made of straw that embodies all of the sins committed during 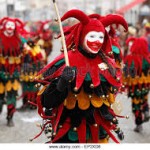 carnival season. It is buried or burned with great ceremony on Tuesday evening before everyone party’s one more time till Ash Wednesday arrives.

How Did This Celebration Originate?

Fasching or Karnival celebrations stem from various beliefs and needs. For Catholics, it provided a festive season of food and fun before the Lenten fasting period would begin. During the late medieval times, plays were performed during the Lenten period called Fastnachtspiele.

Further, we have carnival traditions that can be traced back to historical events. After the French Revolution, the French took over Rhineland. Out of protest against French oppression, Germans from Cologne and surrounding areas would mock their politicians and leaders safely behind masks during carnival season. Even today, caricatures of politicians and other personalities can be seen boldly portrayed on floats in the parades.

So as we prepare for our 40 days of sacrifice and penance, live it up the next few days!!